With the allocation of the European Championship Long Distance in 2019, the organization of CHALLENGEALMERE-AMSTERDAM is adjusting its race schedule slightly compared to previous editions. For example, the Junior Challenge moves one day forward and the races on Sunday will be moved. This gives extra focus to Saturday, when the European Championship Long Distance is held but also the very popular Middle Distance.

According to Race Director Richard Belderok, this new schedule is not only related to the European Championship, but just as much with the World Championship that will be organized a year later, in 2020. ,,We will organize six different races in a week then and these races will be hosted on two different locations”, referring to the Esplanade but also the Kemphaan. ,,We try to make both 2019 and 2020 event schedules as identical as possible.”

This means that this year – 2019 – the Junior Challenge will be held on Thursday 12nd September: one day earlier than usual. Usually this race was always held on Fridays. On Thursday 12th 2019 also the Business Relay will take place, a race that normally always was held on Sundays. This year this race will end with a big party on Thursday evening.

The No Limit & Senior Challenge will still be held on Friday 13th September, but there will be no other races on this day. ,,This allows us to start the athlete briefings earlier and gives us even more time and attention for the athletes who will start the Long Distance or Middle Distance on Saturday”, explains Belderok. ,,And this also allows participants to check in their bikes earlier and for longer time on Friday, the day before race day. This will enable us to improve the quality of our race. Of course there will be a pasta party on Friday and triathletes will get the opportunity to test our swimming course.”

Saturday, 14th September in 2019, remains unchanged in terms of schedule. Then both the Long Distance (this year the European Championship) and the Middle Distance will take place. On Sunday 15th September there will be no Business Relay – which has been moved to Thursday – and the Eredivisie final, which has been held in Almere for a number of years, will be removed from the race schedule. ,,We will use the Sunday for the award ceremony: especially in the case of an European Championship we think that there should be full attention for that. But we also organize a big party to thank all of our volunteers.”

This year, the organization of CHALLENGEALMERE-AMSTERDAM is organizing the National Championships Cross Triathlon on 8th September as well. ,,So this year we already have several races, spread over several days.” 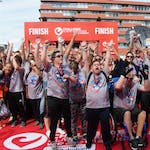 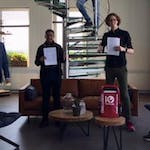 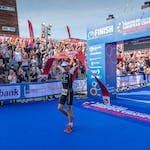